Matt Damon and Christian Bale star in an accurate racing film that’s enjoyable for almost everyone.

Electric cars may save the polar bears and eliminate smog, but there’s no better sound than the roar of a supercharged V8. Ford v Ferrari opens with a chorus of racecars tearing open the earth with their exhausts. The camera is pinned to Carroll Shelby’s (played by Matt Damon) face and then to the road whizzing by at unfathomable speed. The true story is about Ford’s quest to defeat Ferrari in the 24 Hours of Le Mans. The film is like a road trip through history that delivers— they’ve finally made a great car film that is actually about cars.

Making a film about fast cars is all about self-control. It’s like being given the keys to a chocolate factory while on edibles…temptation has to be managed. Most motorheads are smitten simply watching cars roar by for hours— hence the entire racing culture of 24 Hours of Le Mans. For a film to work there needs to be a compelling storyline and characters we care for. Ford v Ferrari delivers both but not immediately. Its runtime of 2 hours and 32 minutes means there are lulls in the story as they unpack decades of automotive history. Stay for the ride though, because where it takes you is worth it.

As a motorhead, you’ll be thrilled to see racing depicted accurately. A quick aside, The Fast and Furious franchise isn’t about cars, it’s an action series which happens to have cars in it. In Ford v Ferrari however, it’s all about the cars. They get into the specifics about cornering, brake-fade, drag coefficients, all without getting too detailed. There are no scenes that involve a Ferrari being driven out of a plane, we’ll leave Vin Diesel to deal with that.

The director, James Mangold, ensured a concise storyline was built at the start of the story, before they could unleash the racecars— although we do get little of Carroll Shelby whipping around his 356 Porsche Speedster on California canyon roads. That’s where the film begins, with Shelby, one of the greatest American icons in automotive history. He designed the AC Cobra. To paint a picture of what kind of man this Texan was: he removed a puny 2-liter engine from the AC Ace, which weighed about half the weight of a modern Honda Accord, and plopped in an engine nearly twice its size— and sold them to the public! He was also the only American to have won the 24 Hours of Le Mans at that time in history.

The characters and story make it approachable for non-motorheads to enjoy the film. This is seldom pulled off effectively. In the 1990 classic, Days of Thunder, they had to shoehorn romance between Tom Cruise and Nicole Kidman to keep viewers interested. In Ford v Ferrari you grow to care for the characters. Christian Bale plays Ken Miles, a bulldog-like racecar driver who always spoke his mind and thus burned bridges. What you saw through the recklessness was the love Miles had for his son, Peter (played by Noah Jupe) and his wife, Mollie Miles (played by Caitriona Balfe). You could empathize with a man who knows his one gift and has to plow through obstacles in his way— after all, he was a tank commander in World War II.

Let’s face it. If you make something for everyone, you make something for no one. Ford v Ferrari is for the guy or girl who jumps to attention when they hear the guttural howl of a big-block V8. Ford v Ferrari stays accurate in their depiction of 1960’s Ferrari: passionately romantic artisans of motorsport, and 1960’s Ford: arrogant, old-moneyed businessmen. Hats off to Mangold for including a brief shot of Gianni Agnelli, the Fiat Scion, and coolest Italian that ever lived, in the film. Lee Iacocca, one of the most prominent executives of his time, was excellently portrayed by Jon Bernthal. The gruff and imperious Henry Ford II is performed flawlessly by Tracy Letts— if you don’t know what he looks like, think “scary father” and that’ll complete the picture.

Between scenes of booming races are heartfelt and clever scenes that encapsulate the ideal times of 1960’s Americana idealism. At the core of the story is friendship. The contentious friendship Shelby and Miles formed a bond only brothers can feel.

The race scenes will have you gripping the sides of your seat as the Ford GT40 battles Ferrari’s sleek, red 330 P4. The heart-racing speed is conveyed from low angle shots and precise sound editing. You can almost feel the fatigue the racers felt enduring a 24-hour battle. Some racing enthusiasts may be disappointed with no film referencing to the 1971 classic Le Mans starring Steve McQueen. It’s purely an original film.

For any story to work there has to be conflict, resolution, and change. Without spoiling the ending, Ken Miles displays a surprising character change—especially because it was true. The stubborn racecar driver has a change of heart that you didn’t realize you were hoping for all along. The film finishes strong, making you wish you didn’t take an Uber to the theater, and instead were behind the wheels of an unruly Shelby Cobra.

VERDICT: Ford v. Ferrari is a must-see for any motorhead. The story is like a long road trip on a stretch of highway with no speed limit. 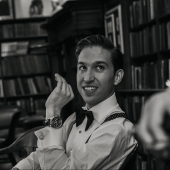 MOVIE REVIEW: Less is More with ‘The Old Guard’

VIDEO GAME FEATURE: ‘Pokemon Sword’ and ‘Pokemon Shield’ Challenge Players In Ways That Have Nothing To Do With Gameplay

MOVIE REVIEW: ‘Sicario: Day Of The Soldado’ Is A Serviceable Sequel, But Falls Short Of The Original