MOVIE REVIEW: ‘Underwater’ Is Harrowing Horror At Its Most Entertaining

In an industry that constantly explores the unknown, Underwater is a suspenseful deep-sea horror film that will have you at the edge of your seat the entire time. There is so much that we do not know about the deepest places in our ocean, whereas almost anyone can tell you about a black hole. However, this film turns away from outer space, going instead to the depths of the sea.

Underwater focuses on a sparse group of characters surviving a series of disasters at the very bottom of the ocean, caused by unknown and terrifying forces. Each member of the cast has unique defining characteristics, and they work well together. Kristen Stewart’s mechanical engineer Nora Price has taken a job at the bottom of the world to get over a failed relationship. She provides a mentoring relationship to Jessica Henwick’s biologist Emily Haversham is incredibly smart and loyal, but absolutely unprepared for crises. Both find friendship with T.J. Miller’s Paul Abel, who sometimes comes across as a frat guy, but he has a softer, gentler side, as exemplified by the stuffed rabbit he takes everywhere with him. Supervising and guiding the lot of them is Vincent Cassel’s Captain Lucien, a devoted father with a mysterious and perhaps sinister past.

Both the plot and horror of the film are incredibly refreshing. It seems that most horror films these days focus on creepy locations with forgettable casts. The films in question don’t have much of a plot, and consist almost entirely of interchangeable jump scares. When someone goes to the movies, they don’t want to see something they can get at home by playing Five Nights at Freddy’s. They want a provocative, unique experience. The earth is over 75% water, and yet we know so little about what is beneath that water. Some films, like The Abyss, have explored this from a science fiction angle. Underwater takes a deep, dark look at the abject horrors of being helpless in the most remote part of the world, seven miles deeper than the nearest help, under 1,071 times the normal atmospheric pressure. This film also utilizes the latest in CGI and set design to realistically depict deepwater colonization in a near and possible future. Many of the technologies in use, such as computers and transports, resemble our own today and are not unrealistically futuristic.

The one downside about this film is that, while mentioned, the context is inserted in utterly cliché fashion. A series of corporate papers and official documents over the opening credits describe that a company is drilling the bottom of the Mariana Trench, the harshest, most forbidding place on our planet. These documents go on to describe that those responsible for maintaining the drill at the bottom of the ocean have suffered suppose it psychological damage, which is passed on as hallucination and fatigue. At the end of the film, the outcome is presented Using similar techniques. Nonetheless, in a film that focuses almost entirely on horror, action, and suspense, one can forgive this light exposition. The film is meant to thrill you, not teach you. You definitely will be thrilled and horrified, at the edge of your seat for almost the full ninety-five minutes.

People fear what they do not understand. In an age when the surface of our planet is no longer as much of a mystery, and everyone is preoccupied with outer space, Underwater provides a riveting tale of the deepest of the deep-sea, the last frontier. 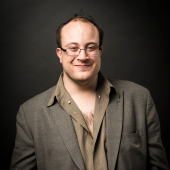 Alec Frazier is an autistic 33-year-old resident of Takoma Park, Maryland. He is the Director of his own firm, Autistic Reality, and is the copyrighted author of two books, Without Fear: The First Autistic Superhero and Veni! Vidi! Autism!. He is a pop culture critic for Flickering Myth, Starburst Magazine, and The Deadbeat Critics. Alec has appeared and spoken at multiple conferences and conventions, including New York Comic Con. For fun he enjoys photography and sightseeing.

TV REVIEW: ‘Sharp Objects’ Is Poised To Be Your Next Great TV Obsession

COMIC REVIEW: Kryptonian Folly Is Bendis’s Sandbox In ‘The Man of Steel’ #1